It went by in a flash, but the wisdom from this year’s NAHF Conference (National Association of Hospice Fundraisers) won’t soon be forgotten. Here’s a snapshot of some of the fabulous knowledge and experience we gleaned from hospice fundraising experts at this year’s unforgettable event:

Trinity’s Elephant in the Room project started after Lorna’s husband, Ian, passed away at the Hospice. 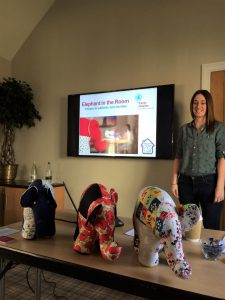 Lorna felt that, over time, people slowly stopped talking about Ian; she wanted, in whatever way she could, to keep his memory alive. With a soft toy elephant pattern found online, she crafted her own keepsake out of the shirt Ian wore on their 50th wedding anniversary.

The finished elephant was amazing; other people, including the hospice wanted to share her idea, leading Lorna to make them for other bereaved families.

This unique keepsake is now hugely popular; some in-patients have had them made for their families before they pass – with all donations going to the Hospice. They also, importantly, start conversations about death, final wishes and bereavement support; universally difficult subjects to talk about.

Those who’ve purchased elephants have been added to the Hospice database, which means they’re ‘cross sold’ other events and appropriate Direct Mail packs/literature, with amazing results:

Lorna now heads a team of volunteers making elephants for families. 400 elephants have been lovingly created, each costing £25 – though, knowing all donations go to Trinity Hospice, people often give more. With an average gift of £37.50, the total raised since November 2017 is £15,000!

Hearing Victoria’s dual perspective as a fundraiser and recruiter made for an interesting talk. Here are some of the most important skills for fundraising success that Victoria highlighted:

But perhaps even more thought-provoking was the question and answer session at the end, when two attendees shared their transition into the charity sector. Neither had previously worked in fundraising; one was a high-flying businessman who frequently travelled to Italy, another a broker in London.

Hearing their experience of working in charity fundraising really cemented why we do what we do – it’s not about the money; it’s knowing that at the end of the day, you’ve helped someone.

Sarah’s workshop looked at the foundations of online communications to raise awareness for charities, leading to pathways to ‘purchase’.

The key to success, as always, is creating a plan and guidelines that your charity’s team can follow; for content, for tone of voice and rules of engagement. Is it better to be transparent about when your team is around to help? Is it really possible to have your team around to help 24/7? Having these conversations with your online audience is vital – honesty is always best.

Building trust and engagement from your team and other charity employees is also crucial – they’re some of your key ‘influencers’, who should share your enthusiasm and stories with their networks. But, it’s just as important to look at the outside influencers your charity has – the recommendations of your biggest supporters can build authenticity and subsequent engagement, driving traffic to your cause.

Finally, we mustn’t shy away from seeking the stories from our charities; there are so many ways that these can be shared with audiences, creatively and otherwise, across channels. ‘Traditional’ social media is also shifting; Facebook could soon abandon its news feed – paving the way for smaller, private groups. If that’s the case, how can a charity make the most of its content in this new arena? We must embrace these opportunities; get creative, rather than be scared.

NAHF wouldn’t be complete without a workshop from Pebblebeach’s very own fundraising guru, Ash. The talk focused on the key elements to help ensure a hospice’s capital appeal is well-constructed, resourced and, ultimately, successful. From nailing the plan, to knowing when to go public – Ash’s talk was peppered with examples of the good, the bad and the downright frantic – highlighting the age-old fact that history always repeats itself, but we can try to learn from others’ mistakes.

With the hospice movement surpassing its 50th year, the physical spaces in which this amazing care is delivered must adapt. The new requirements of each hospice are unique – to the landscape, the community and the drive and passion of the amazing people who make hospice care possible. Understanding the vision for the future of this care is paramount – and will ensure, whatever a hospice’s 50-year plan is, the community is engaged and supportive throughout.

So, there you have it – our brief round-up of two inspiration-filled days of fun and friend-making! If there’s anything else you’d still like to know, get in touch – and we’ll happily fill you in!